The Greco-Roman orphanage was a large complex located on the East Side of Buffalo almost directly across the highway from the Science museum.  It was also the largest non-industrial site we’ve explored to date with two dorms (girls/boys), a school, a chapel, two medical buildings, a gym, and some other places we couldn’t get inside. 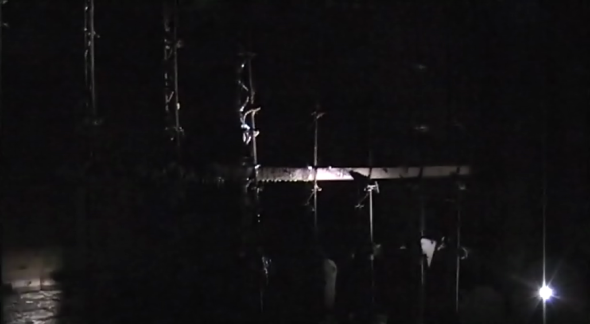 A burned out section of the boy’s dorm.

A flooded section of the dorm.

Disclaimer: All of these are screencaptures from the video I took. At the bottom are links to the three videos I made.

From inside the Boy’s Dorm.

This place was also really creepy. You know in The Shining how the feeling of being alone and isolated in that huge hotel really adds to the tension? It was kind of like that. It was also a little strange walking around and seeing the day to day papers from over twenty years ago, like one day the whole place just picked up and left everything behind.

It was obvious before we even got inside that it was still a well used place as the evidence of people going there to drink was everywhere.  Also some squatter was apparently using various holes in the wall as bathrooms, which is weird because there were so many actual bathrooms in the complex.  No paper towels though. The first building we thoroughly explored was the gym. This was the building with that neat iced in classroom I mentioned in a previous post. 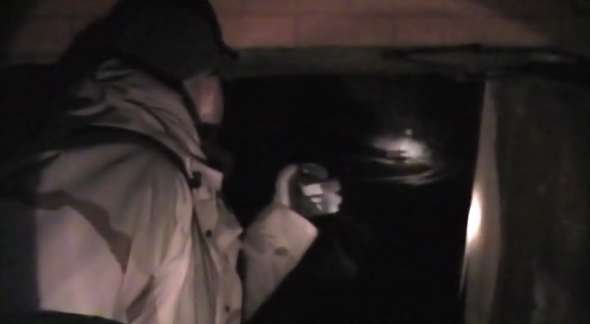 Still can’t see it but here it is.

The second floor was a basketball court with all sort of fancy lighting equipment which makes me think it doubled as a stage in the way only a school can get away with. Production values? Heh.

It was at this point we started to think someone else might be in the complex with us (this being our second trip) and we got a little paranoid. We carefully trekked back over to the administration/classroom building for a bit before we headed over to the Boy’s dormitory. In the tradition of everything else in this place it was rather large and had about twenty bathrooms.  This dorm had the most Silent Hill like vibe to a place I’d seen with collapsed sections that had tiny indoor waterfalls and an entire burned out hallway of dorm rooms. There were even red squares (with nothing attached to them or indicating why they were there) that looked like the save points from the second game.

Save point. Something dangerous is ahead.

It was in the Boy’s dorm where we got really paranoid because we kept hearing what could’ve been footsteps and someone shuffling around. We ended up in some bright white hallway and my friend swore he saw a shadow of something run from one room to another. Just like real live urban explorers pretending to be a SWAT guy or something we check each room from where we were up to the room with the tango inside. We bravely pointed the camera in first and saw nothing. There was a recliner and some strips of cloth blowing in the wind. My friend figured he saw the strips shadows on the wall but being that we were three or so stories up and had a wide open window I was considering possible Batman activity. 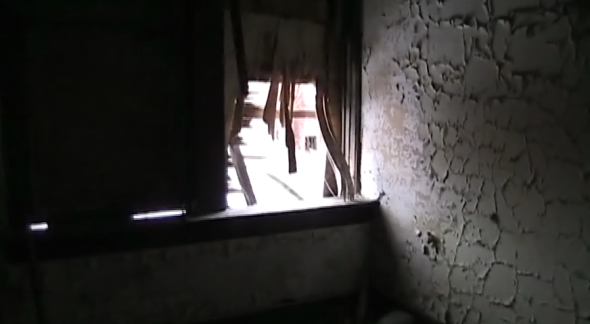 We considered at this point if we would try and make it to the infirmary or quarantine buildings but from what we could see they were well boarded up and in the view of some church goers. Not wanting to scare any elderly people we ended back up in the basement of the admin building.

Now the admin building was connected to the chapel by a tunnel. Inside this tunnel were brick paintings by the children who lived there and they seemed to all have this concern with being forgotten which, without further context, was both depressing and creepy. We avoided the tunnel on our second trip but here’s a picture or two of it for reference. 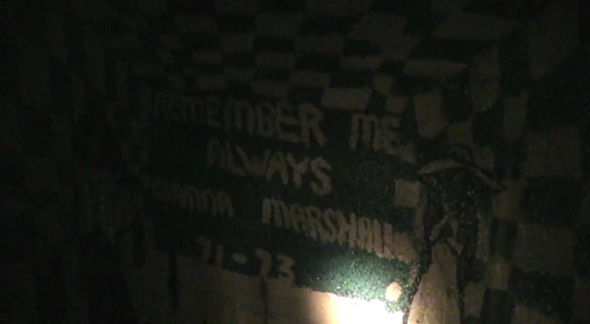 The chapel itself had almost no pews left inside it but still had the organ and song books. In our first trip (which I’ll probably write about another time) we had been through the upper floors of this part of the complex so we decided to head downstairs. In addition to a water main that look was leaking and looked (according to the engineer) like it was in really bad shape there were even more classrooms down here. There was also a series of maintenance tunnels that were about half height and after a little reflection on the length of my life I decided not to venture into them.

Could be slendermen in there. Certainly no cavers named Ted.

One of the rooms we had passed on our first trip had a collapsed floor that had engulfed a classroom below it.  Now, down here, we could see it from the more upsetting perspective of being below the collapsed floor.

Yep, that was attached before.

There was some storage down in the basement and some art and science classrooms but not much else really exciting. It was completely pitch black and I kept wondering how we’d get out if the flashlights all somehow died at once. We found a bunch of student works and lesson plans down there in addition to one incorrectly filled out spelling word. 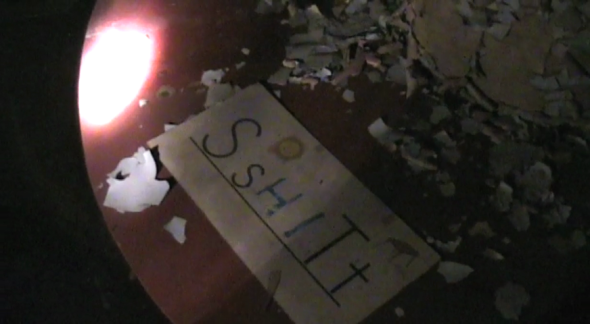 This was about my reaction when I saw the collapsed section in the previous picture.

This would be our last trip to the orphanage (but the first one you’re reading about!) and it was recently torn down and rebuilt into useful housing. I sometimes wonder what they did with that hallway of creepy bricks.

Some sort of ancient 5.25″ technology.

If you were wondering where the videos I mentioned were, here is video one, two, and three.

03 Aug This entry was published on August 3, 2012 at 3:47 am and is filed under Behind the Concrete Curtain. Bookmark the permalink. Follow any comments here with the RSS feed for this post.

One thought on “The Orphanage”