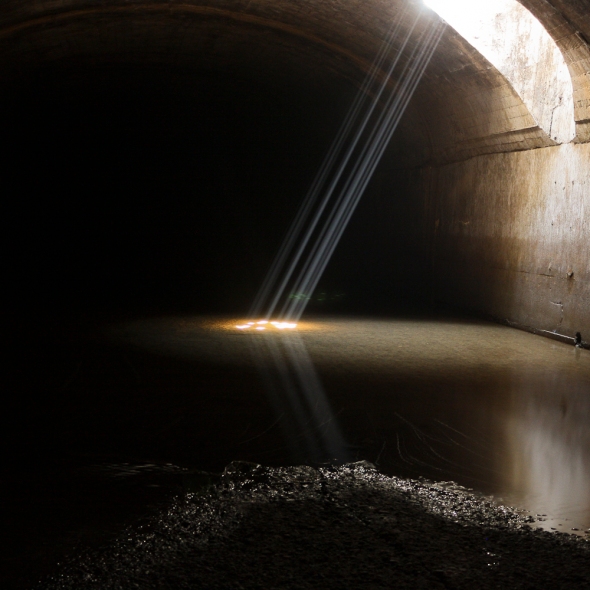 Beneath the streets of Buffalo’s East Side there is a buried waterway that stretches for miles unseen. Back in the 1920s the city decided that the section of the Scajaquada creek that was next to residential properties needed to be covered up and replaced with scenic asphalt. Regardless of the rather strange city planning habits of Buffalo it did create a unique urban exploration opportunity.

This storm drain/sewer begins in Forest Lawn Cemetery and runs for three miles underground before opening up again around St. Villa Maria College. This is just the main tunnel and doesn’t include the numerous branches and sewer tunnels which run off perpendicularly through the area.

You can go North or East >

I’ve mentioned before how bad an idea it is to go in these storm drains when there’s a chance it’ll rain. For our two trips into the tunnel we waited until the middle of the summer, and made sure it was a week where it hadn’t rained and there was no forecast for it. This would mean the water levels inside the tunnel were at their lowest and we wouldn’t have any surprises flushing us out.

We had to dress a little differently than we usually do for this trip and bring different supplies. Since we were walking the entire three miles and back, we brought a lot of water. The tunnel got very warm and humid in sections and, even though we drank plenty, I still came out feeling dehydrated. We also had to wear those big rubber wading boots because even the shallowest sections of the tunnel were about four to six inches deep with some being up to our knees.

Speaking of the side tunnels on our first trip we decided to follow one and see where it went. It took us a few minutes to get to a section where a very loud waterfall and a hole in the tunnel prevented us from continuing. My friend decided he wanted to jump over the hole and continue down a ways and encouraged me to do the same. Since I was carrying an additional fifty pounds of cameras, water, and other important must-have urban exploration stuff, I declined. I also didn’t like the idea of falling down into the waterfall and drowning in a hole. 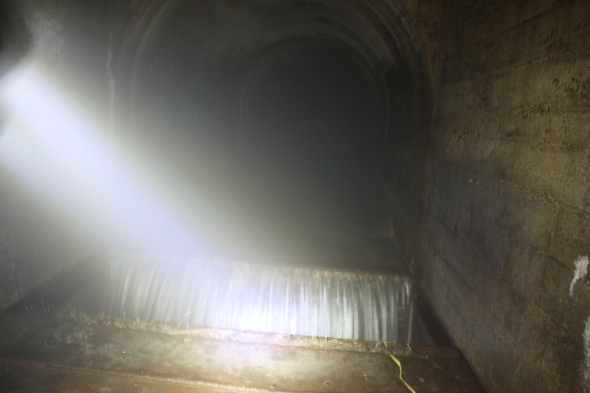 Now, if you’ve ever seen the movie “Altered States” you might be familiar with the concept of a sensory deprivation chamber. The idea is that when you provide the brain with no external stimuli it creates it own (i.e. hallucinates) and you experience some rather strange things. Well even though we had flashlights down here it was still extremely dark. At one point, for some reason or another, my friend’s light went out for a bit and while he was fixing it (or breaking it further) he was looking around and saw a giant shadow dog running down the tunnel at him. With the hounds of hell bearing down on us, the quickly restored flashlight showed, of course, that nothing was there. Myself, I occasionally heard voices (whispers really) in the dull roar of side tunnel drains and could always ‘see’ movement in the dark sections ahead or to the side.  Creepy stuff.

It might not look that dark but that’s because this was a ten second exposure with the aperture wide open. Also photoshop.

One thing we unexpectedly found down there was wildlife. In some of the sections closer to the Villa Maria end, which was generally deeper, there were albino fish. Also down there were similarly colored crayfish. None of these animals were particularly interesting beyond that and there were relatively few of them but this was the first time in our urban exploring we found something alive and thriving.

We noticed these numbers were at regular intervals down the tunnel. No idea what they were for. Also we found a historical sign from a town about ten miles down the creek, so if any town workers were wondering where that went, try there.

The last bit I wanted to mention was the number of disgusting smelling things that were flowing down into the storm drain. There were lots of very strong chlorinated smelling streams of water coming down but also other chemicals I couldn’t identify. It was also pretty clear that when the sewers overflow or the storm drain fills, sewage gets dragged downstream. This is kind of a concern since the drain, and hence the creek, feeds into Forest Lawn and Delaware Park for which the latter is known for not smelling particularly good. So in addition to the garbage in Hoyt lake there is likely also industrial waste and other bad things. I wouldn’t swim in it. 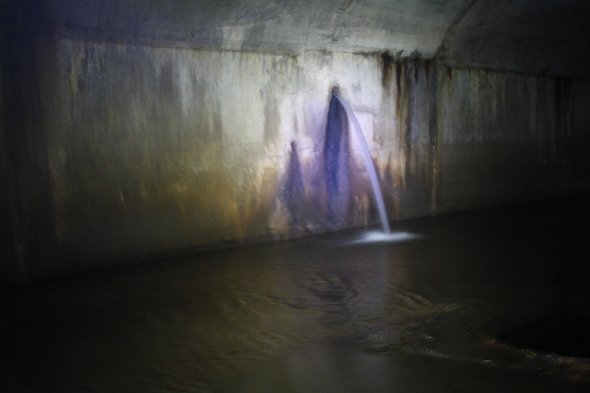 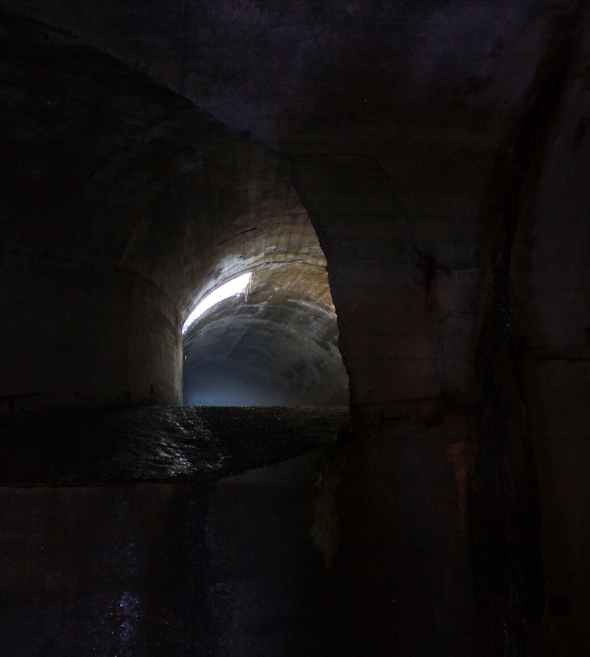 That’s not money trickling down there.

In a future post I’ll be mentioning two other places we’ve visited which are on the list of Western New York’s Most Toxic. This is where I’ll introduce and discuss the don’t-fucking-touch-that rule.  More of a guideline really.

39 thoughts on “The Tunnel”