What seems like a very long time ago, an era in which Arrested Development had only been cancelled for a year, I took my first foray into urban exploration. 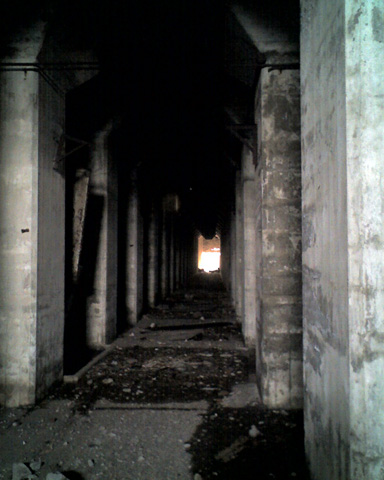 My friend had just returned back from his desert adventure with the Air Force and was getting civilian cabin fever. (For more on this read Chris Hedges, it’s short and insightful.) While over there he had seen the palaces, artificial lakes, and the Flinstone village built by an arguably unstable man with too much money and not enough taste. We had also read urban exploration sites and figured if these people could do it without dying well, damn it, so can we. First, we had to see a man about a boat.

I wasn’t kidding. Thanks Larry!

My friend had a friend who had a boat. This boat was kept in a marina that happened to have a large grain elevator on its property. If you live in Buffalo you’ve seen it. So we went to visit this fellow’s boat and while admiring the off-board motor happened on an unlocked, and poorly attached, door on the side of the grain elevator and in we went.

Armed with the finest in photographic equipment (A Razr. No, not a droid.) we began slowly navigating the dark and somewhat claustrophobic basement of this monster. The owner of the marina was using it to store a boat and some other junk. We took pictures of said junk and found an old pepsi can. Score! 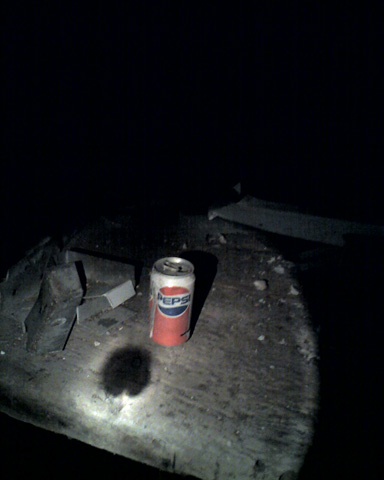 You see once upon a time, cell phones didn’t have a flash bulb.

We also found the remnants of old electrical equipment about which my engineer friend told some fascinating things but I can’t share them with you because I don’t really know what he said. I think we found some old fuses still intact though, that was kind of neat.

I have to admit this whole thing was making me nervous. I was worried about getting caught or injured or attacked by a tall thin man in a suit. Of course it wasn’t until later that I actually realized the building itself was what I should be worried about.

We found a staircase going up to the top floor and began climbing that. What we didn’t know then but came to find out later was that it was very odd for an elevator to still have its stairs intact. Cargill, Concrete Central, and parts of Silo City have their stairs cut out and if you want to go up you have to walk on the tabs. 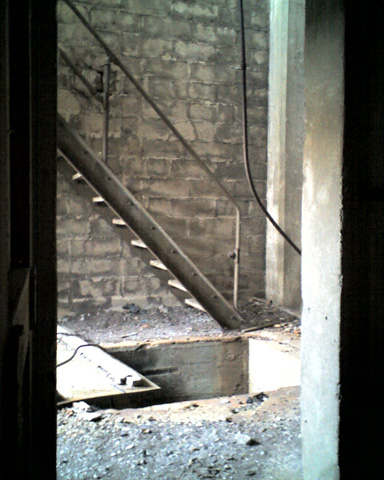 About half way up we decided to stop and look out the window and got quite the view. A somewhat overweight man with no shirt was being pulled along in a tiny boat by a larger one. He was surrounded by beer cans and was yelling, I thought at us at first, while being pulled around. Once he was out of sight and still yelling we continued on up. 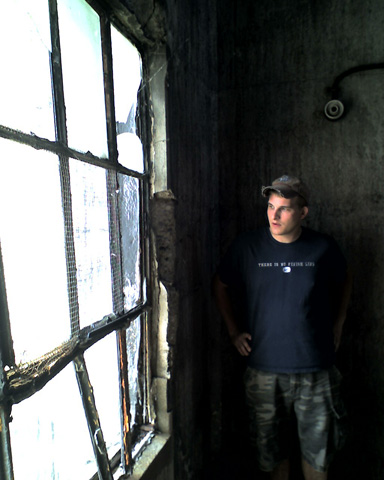 We noticed parts of the stairs had fallen down the center of this tower and some of the landings were a bit springy. No worries, I was told, these bolts look fine. At the top we could see out on to the roof which was in pretty rough shape. We took pictures from the landing but didn’t dare to venture out further. We assumed that most of this damage had been from exposure to winters on the lake shore and maybe that little ice storm we had in 2006. 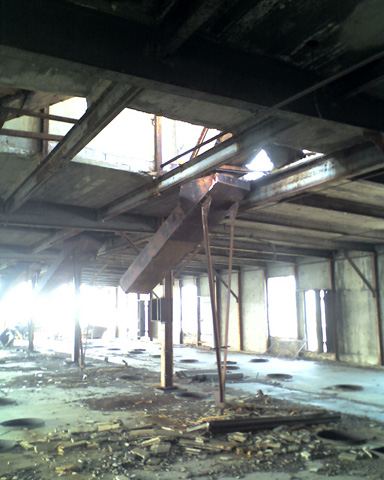 We started on our way back down when I noticed that the stairs weren’t attached to the walls up here. They had, in fact, started to pull away noticeably as we walked down them. We began to descend faster. Did I mention the railings up here had fallen down the center of the shaft? Excitement! 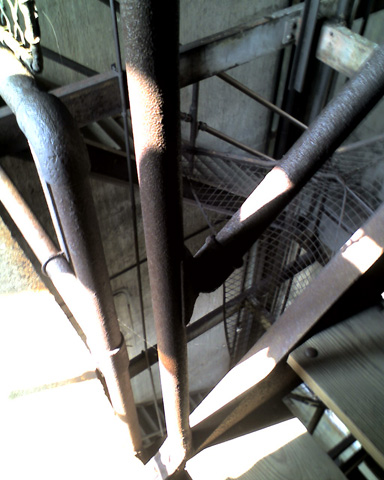 About half-way down we realized we were back on the still-attached-stairs and slowed down to reflect on future safety precautions lest we be shuffled off this mortal coil. Shaken, but uninjured, had one last look around the first floor and then took our leave.

Byron the Bulb, eyeing us warily.

We had successfully completed our first urban exploration trip without getting caught or dying and, that, was just the beginning of the unnecessary risks we would take.

Here are some videos I took:

Now, much more recently, I’ve noticed crews at the Connecting Terminal cleaning up and removing the structure that made up the rooms on the roof. I have included a hastily taken picture of this progress from the other day when I was on the Skyway. Worry not, I wasn’t driving. 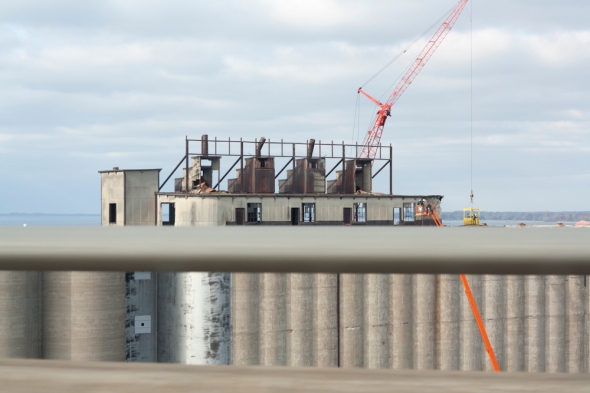 10 Nov This entry was published on November 10, 2012 at 2:16 am. It’s filed under Behind the Concrete Curtain and tagged urban exploration, urbex. Bookmark the permalink. Follow any comments here with the RSS feed for this post.