The Buffalo Youth Media Institute, or, where did the last three months just go? 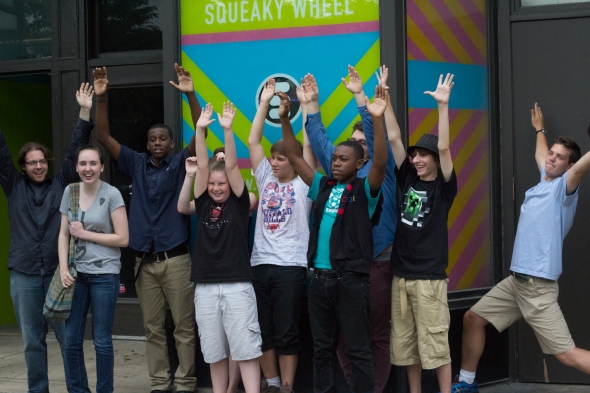 Back in 2013 I was hired to design and implement a summer film making project for Squeaky Wheel. I was given about one month to create everything from scratch, minus a small program I did at Canisius High School earlier in the year, plan out (almost) down to the day, and help recruit students. I ended up creating a small book for the students as well.

Our focus was on the revitalized West Side of Buffalo and specifically organizations and businesses that were important to the area. We had representatives come in from PUSH Buffalo, Journey’s End, Preservation Buffalo Niagara and others. We ended up with sixteen students from various parts of the Buffalo/Niagara area (and some who were initially nervous about being in the super-scary West Side.) 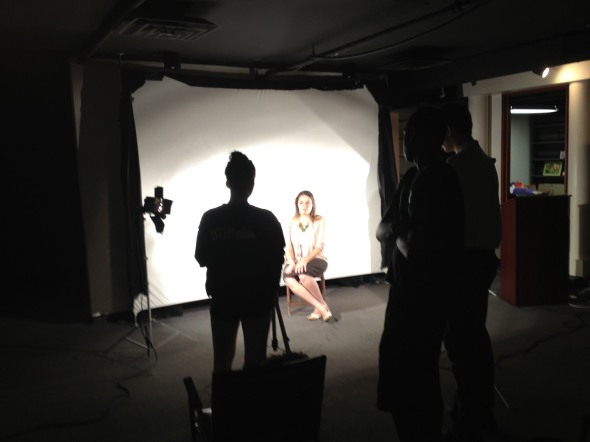 One of the goals I had for this program was to make sure that students were going to be gradually ramped up to expertise. I gave them a vague idea of what they were going to do but never so much as to make them panic. The idea was simple: get the students working with the cameras, and as a team, as quickly as possible and most importantly teach them to plan. They wouldn’t even notice that they were moving at a very fast pace because we started out that fast from day one. They had the support they needed from each other and myself to make sure problems could be quickly tackled. I’ve seen some glacially slow film classes run in high schools and, honestly, I don’t think taking a year to do what we did in two months gives the students any benefits. For a group of students like the one we had here a class like that would probably drive the interest right out of them. 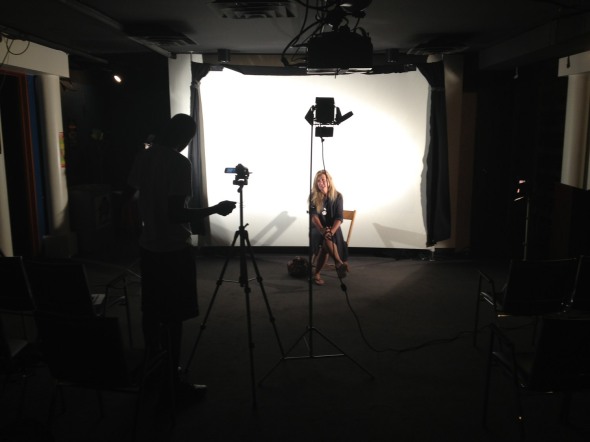 On the first day the students worked with the cameras and lighting equipment, I gave them a rough outline of a zombie movie (don’t worry, there was no blood, it was more like a game of undead tag) and some simple instructions: you can organize these scenes in any order you like and develop them however you’d like but they all must be included. In teams of about four students each they developed their ideas, planned out their filming schedules, and worked with the other groups to make sure there was no conflict in who was where and when. At this stage I was there for support but let them handle as much as possible which they took to. 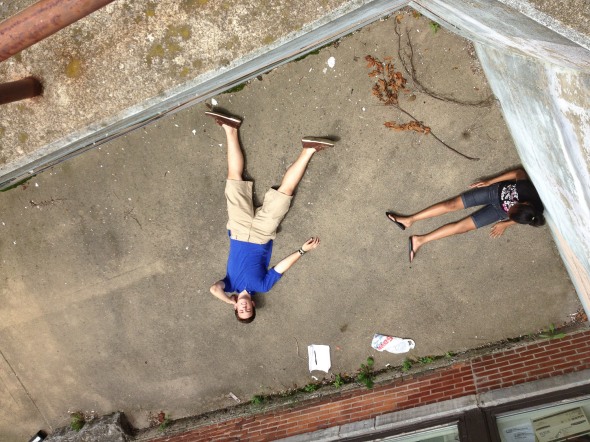 Part of the goal of this exercise was to teach them to plan their shooting by telling them there would be no editing in post. Film scenes sequentially, when a scene goes wrong delete it and do another take, and make sure it all makes sense when we view it in camera at the end. It was a silly arbitrary requirement but it gave them a logistical problem to solve. They’d have plenty of those in the weeks to come.

Finally, I wanted to find a balance between making this a fun experience but keeping it serious enough to give the students as much knowledge and skill as possible. I had to push a bit to get some of the theory and criticism parts of the program in because there was a belief that “kids don’t really want to spend their summer making documentaries.” Apparently my students were just going be bored out of their minds and we had to practically bribe them to come in. (This is not what happened.)

Thankfully, the discussions between students on these more abstract topics proved they were willing and able to tackle film theory and criticism along with social issues faced by people on the West Side. We had a long discussion about a film named “Nickel City Smiler”, for example, which for most of my students was their first exposure to the community of refugees living in the city. Later topics would include poverty, women’s rights, literacy, and even gentrification. We also spent a lot (a lot) of our time analyzing shots and takes, how people try to portray authority or authenticity in documentaries, and how to keep pacing consistent in their films.

One morning during a screening one of the students came up to me and said they had an interview today. I had instructed the students to let me know first thing in the morning if they had scheduled something so I could make sure I had one of the interns around. I asked him when his interview was planning on making a trip later in the day. “In about ten minutes.” We made it with no time to spare.

The youngest student in the program was easily one of the most impressive. He had a knack for film making and animation which seemed years ahead of his decade or so on the planet. One day while working on animation segments with his team he picks up a guitar and starts playing. He only knew the one song but, man, way to make me reassess what I did with my last two decades.

One of the good and bad aspects of running this program was that for most of the morning we had the entire place to ourselves. At some points I was the one stumbling into the dark, dank basement and opening everything up. I always like a creepy atmosphere and with the leaking (and collapsing) ceilings I was rarely disappointed. 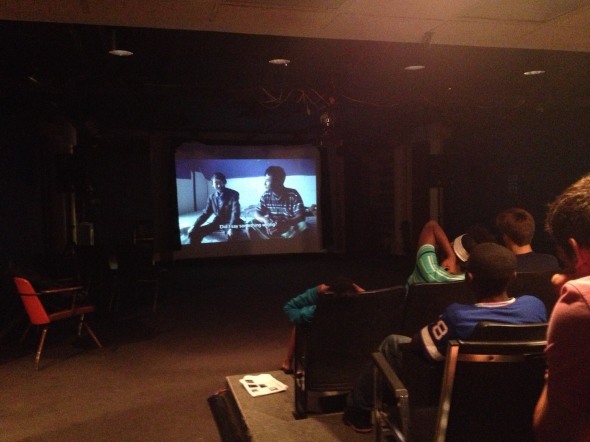 Remember when I mentioned planning? We really only had two strict deadlines in the program, one at the beginning of August to be done with filming (except maybe reshoots) and one at the end to be done with editing. This was an interesting challenge because some of the students were ahead of the game and others had gone on vacations and fallen behind. One of our best documentaries ended up making it in about an hour before the screening took place. I was glad to see the film make it in but could’ve lived without the anxiety.

I knew that some of the students wanted to pursue film as a career in the future and wanted to get some outside expertise from people with experience in the field. A friend of mine, Joe Wachowski, (Link) had made a number of short films and had put together a small festival/showing at Buffalo State so naturally I wanted to bring him in. The students spent a few hours picking his brain and it went over so well we brought Joe back to do critiques of the their films.

We were also lucky enough to have a writer/producer from both The Office and Parks & Recreation come talk to the students. Mary Wall is currently working on a documentary about Buffalo Sabres fans and had been interviewing my (then soon-to-be) wife for the project. We actually attracted most of the staff of Squeaky Wheel for this talk. Mary explained what life was like working on the show, how she was integral in having Jim and Pam get married in Niagara Falls, and even put up with a barrage of student questions.

As I mentioned in the beginning we had some ‘sheltered’ students who were nervous about being in the West side and being around downtown. Thankfully, this wasn’t true for most of our students and by the end it seemed like everyone was comfortable being out of the suburbs. 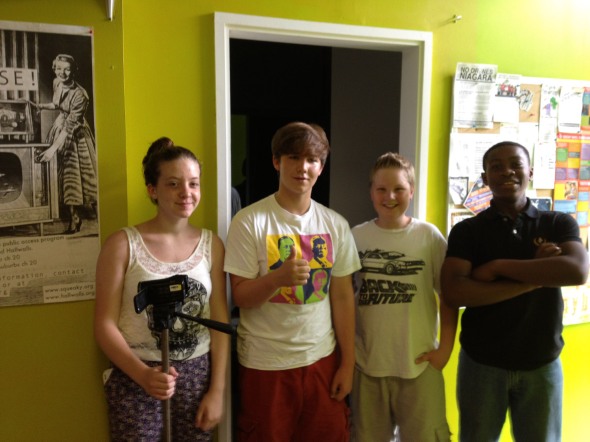 For me, seeing the students works screened at the Burchfield Penney was the highlight of this workshop. We had been written about in the Buffalo News, Artvoice, and even ended up on Channel 7 but, letting the community see what my students had accomplished was more satisfying. Not that I mind some press. 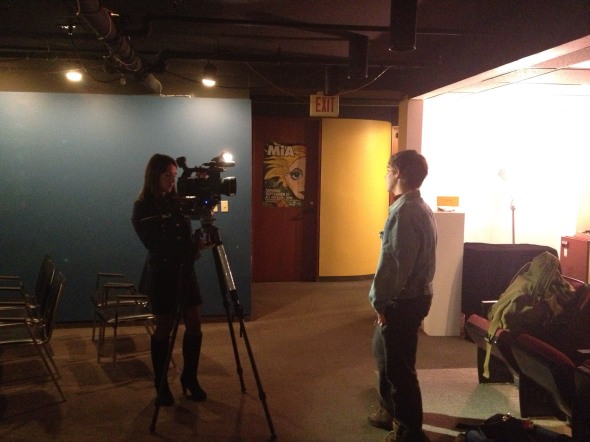 I think if (or more likely, when) I do something like this again I’d like to dedicate days to taking my potential future students out as a group to some of the locations the others were focusing on. Like field trips! I also didn’t figure while planning that having professional film makers come in would motivate the students like it did. I thought they’d get some helpful advice but having Mary and Joe’s involvement gave them a little more pride in what they were working on.

Some of the discussions we had toward the end about documentary filmmakers’ ability to help both shine a light on potential dangers to the community and success stories makes me hope that my students will go on to greater things. I know a few of the older ones are currently film students and are already working on bigger and better things.

Sweetness_7
Guercio and Sons
The Coalition
The Local Side

07 Mar This entry was published on March 7, 2015 at 11:32 pm and is filed under Uncategorized. Bookmark the permalink. Follow any comments here with the RSS feed for this post.